Carolyn sat down with Prairie Fire this July at her young age of 77. Her interview can be enjoyed below. 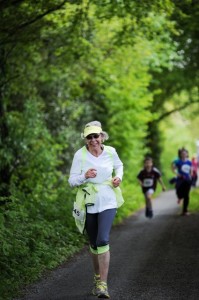 Running a 5K in Ireland 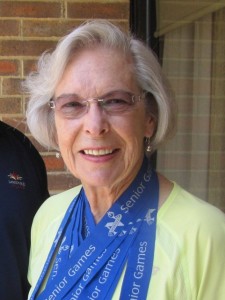 Check Out Her Bling!

How long have you been running competitively?

“I’ve always been active, it’s in my nature. I was a grade school runner, but they weren’t competitive during that time. I didn’t start running until I was 71. My very first race was the Emma Creek 5K in Hesston [Kansas].” 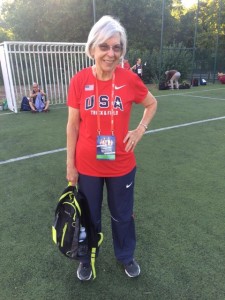 How did you get into running? 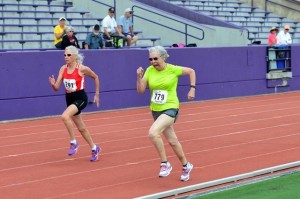 I placed 2nd in my age group at my very first 5K, and I was hooked! I started looking around the area and found out there were lots of 5K races around here that I didn’t know about.

I found out that I’m more of a sprinter, I really do better in shorter races like 50, 100, and 400 meter races, so I really enjoy running those shorter distances.

(There’s a woman named) Jeanne Daprano has been setting world records since she was 50. She’s a very nice woman, and I’ve always gotten 2nd behind her. I love being pushed by her, I’ve continued to get closer to her times. I love getting to run with her and other women around the world.”

I found online that you were quoted in saying that your goal was to run 175 races by the time you turned 75, which you accomplished in 4 years. How many 5k’s have you ran in?

“243, I have them all written down! I get up early on every Saturday morning to run a 5K.” 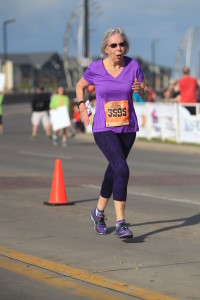 I know you’re preparing to run in France. Where are some of your most favorite races you’ve ran in?

“I leave August 4th, at the World Masters [Athletics Championships] in Lyon. It’s a beautiful place, and people from all over the world come to race. It’s a great chance for older women to come and compete.

Two years ago, in Cleveland, I was at the Senior Olympic Games. I just sort of started doing better, mainly by running the shorter events. I took 2nd place, which was great motivation to continue racing.

I just got back about ten days ago from Minneapolis [at the National Senior Games], I was really on fire! I’m [ranked] fourth in the 100 and 400 meter worldwide (in my age group). I love that, because I ran my heart out knowing that I was going up against other top runners.”

You’ve competed in a variety of indoor and outdoor Track & Field events as well. What’s your most proud moment or accomplishment in your running career?

“You go to France and Budapest, places like that, just hoping to make the cut. What a feeling to come in second place, especially when all of us finished so close together! There’s women from New Zealand, Germany, [Trinidad and] Tobago that would be close to my times. Finishing 4th in Budapest [at the World Masters Indoor Championships] was amazing: I was thinking ‘My God, these women are from around the world!’”

As you’ve logged all those 5K’s, what has become the toughest part of running one?

“That’s hard to say, because the training is different for short distances than for 5K’s. I mainly run them for endurance; to stay in shape. I’ve gotten beaten in them, because many other women run and train only for 5K’s. The women that beat me are wonderful and very supportive of each other, and that’s a good thing. If I trained just for 5K’s, I would do better, but I use it as an endurance exercise. I love going to small towns in Kansas to run them. I get up every Saturday morning to go to places like: Eureka, El Dorado, Lawrence, Salina, and Topeka. I’ve been to Kansas City a lot; I love Caldwell, they’re so nice to me, the 4H chapter kids put it on and do a good job!”

Do you have any special rituals or routines that you attribute to your running career?

“Oh yes, definitely. Larksfield [Place], where I now live, has a tremendous exercise program. I train Tuesdays and Thursdays a week with my friend Rodney Smith, with weight training. We do it year-round religiously! I have to credit him with building muscle for me, he does it the right way. He pushes me and makes things tougher every year.

I just go out and run every day. In the winter, I use the elliptical machine…mostly at the Heskett Center at Wichita State.

And like I said, running a 5K every Saturday morning keeps my endurance up.”

Obviously you like running, what do you enjoy most about the sport?

“Running…makes endorphins kick in, and I just feel so happy that it’s something I can do. I just think, ‘My god, here I am at 77 years old, and I can run a few miles!’

I love the people. What I have learned about the running community, is that it’s a social one. Everyone is nice to one another, and they talk about being active. I love to play cards, I can play bridge all day long, but it’s nothing like the running community. You’re being active, outdoors, and taking care of your body! We should continue to push older people to run!
It sounds kind of childlike to talk about medals, but we are kind of all kids. I’ve got over 250 medals, I’ve decorated my garage with them, and I love them! It’s important for the senior crowd, people who are 75-80 years old, to still get recognized and be able to win things.’

What is your favorite aspect of the Prairie Fire Race Series compared to similar events?

“With me being more of a sprinter and a runner of shorter distances, I really like the flatness of the Prairie Fire course. It definitely makes for a faster time! I have run the Prairie Fire Spring 5K twice and I think it is an enjoyable event that promotes the city of Wichita in a great way.”

What advice would you give to anyone who is thinking of taking up running?

“The best advice is to push yourself…you can go out and look down the street and think ‘Huh, I can run down to there,’ and then once you do it, continue thinking you can keep going further to the next block.
I measure my distances, and I love it because I have everything marked, so I tell myself ‘I’m going to run to this point today,’ and then I do it!
I love running in groups, because regardless of how good or bad the runners are, everyone helps each other and is supportive.”

Any thoughts on the future?

“I hope I can run at least through 80 [years old]. I actually look forward to getting older and being able to run when I’m 80, so that I can be in the next age group and keep trying to win! My running friends are the same way, it’s the only game in town where everyone wants to be older!”