The Prairie Fire Marathon’s finisher’s medal features the image of the old city hall’s clock tower, which is visible from the run’s start/finish line. Wichitans today may be surprised to learn that the tower, though designed to include four clock faces, did not actually have a timepiece installed for 25 years after the building was opened. 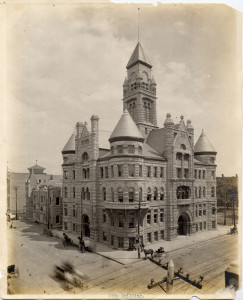 This 1908 postcard image shows the old city hall (now the historical museum) as it originally stood, with no clocks in its iconic tower. Though built in 1892, the building had to wait until 1917 to be finished as it was planned by architects Proudfoot & Bird.

Wichita’s first purpose-built city hall, one of the few remaining local structures designed by architects Proudfoot & Bird, was erected over the span of two years, 1890-92. The project suffered numerous setbacks, not the least of which was a controversy over the sourcing of the limestone, and subsequent quality control issues with the stone that had been selected, forcing another quarry to be contracted for the material. When opened to the public in April 1892, the Wichita Beacon reported that the endeavor had cost a total of $104,352, including the cost of the land — a considerable expense of public funds in those times.

That budget did not, however, including funding for a working clock for the building’s tower. For a quarter-century, the circular clock face openings were simply filled with blanks. In 1910 a public campaign to fit the tower with a fine and proper timepiece was launched. It would take seven years, but eventually the city responded to popular demand.
The April 12, 1917 edition of the Wichita Eagle reported: “The new clock purchased by the city from the Seth Thomas Clock company, of Thomaston, Connecticut, for the tower of the City Hall, is being put into place under the direct supervision of Oscar Melinder. The clock was purchased through Cleon Whitney, local jeweler, and weighs a total of 5,000 pounds including the big 1,000 pound bell. Each of the four glass faces with its heavy iron frame weighs 500 pounds and measures seven feet in diameter. The clock will strike only during the day in order that sleeping guests in a neighboring hotel will not be disturbed. It should be ready for business within the next ten days.” 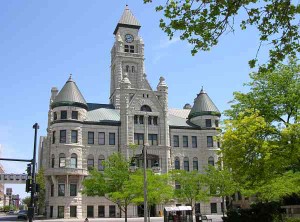 In 1954, the clock tower saw the addition of its trademark musical carillon, donated by Swallow Airplane Co. president Sam Bloomfield and his wife Rie.
The City of Wichita moved its offices to the present city hall in 1975, preserving the original building for its current occupant, the Wichita/Sedgwick County Historical Society Museum.
This moment in Wichita history is brought to you by The Donut Whole, 1720 E. Douglas.
finisher's medal , Prairie Fire Marathon , The Donut Whole , Wichita History
Tweet This Post
© 2021 See the Prairie Fire // theme by amplifiii // back up ↑