Here’s a great last minute tip on how to spend your Saturday! Take the whole family out to support Hesston’s newest race. Our friends have a great event scheduled for the morning! 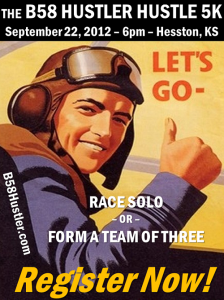 “The thing I checked was to make sure that Kansas and Kansas State didn’t have home-games.  It was a great coincidence with Coming Home weekend and the typical schedule reworked. The Chamber has been great to work with as far as mutual promotion,” said Chad Lane, formerly Mullet, Director of Global Strategy for Excel Industries.
“The idea really came from our Hustler Days event. We have it every two years and it’s something that we invite customers in, and not only from the U.S., but from around the world.  They come in and spend time with us for the relationship aspect, introduce new products and that sort of thing.  We do so much work to get ready as a company we thought it would be great to leverage that into something that is more a community event instead of just an internal event for us and customers,” said Lane.
Lane said the idea for a run was rooted in his own interests and the ability for the event to grow.
“We started thinking about what we can do.  I love running and so I suggested something like this. Throughout our history as company, we have always been involved in charitable giving. This was not meant to be marketing activity.  We thought if we are going to do it, we should connect it to the community and connect it to a cause and make an event that will benefit Hesston and a charity and not just our company,” he said.

“We are working with Carlota, and she is fully of energy and getting things done. She’s bee a great help and her involvement.  We are focused on helping the Kansas aviation museum. It may be outside Hesston, but it is still all about the Kansas community,” said Thyng.
Excel chose the Kansas Aviation Museum as the beneficiary for the first-time event.
Thyng said the company’s Hustler brand’s history was rooted in the aviation industry.
“The B58 Hustler was the first supersonic jet. It changed aviation. We named the first zero-turn mower after the Hustler because of the engineering innovation,” said Thyng.
Lane said innovation is a quality Excel prides itself in, and opening up Hustler Days to include a public event is one Lane feels is taking a step in the right direction.
“It’s so hard to know with this event in its first year. We know Emma Creek can draw over 1,000, but it’s such a well-established event. We don’t know if we will have 100 or 500.  The number we are shooting for is about 300 participating in the race,” said Lane.

“It’s a great opportunity to show display what Hesston is like, to see the golf course and have an event that is a draw and a reason to come.  It will get people out and show support and a good way to promote local business,” said Thyng.
Lane said seeing the event come to fruition and to see the potential benefits to the community has been an exciting experience.
“It’s been rewarding being able to further strengthen the relationship with the community. It’s always exciting to see something to from an idea to something that we are making a lot of progress on,” said Lane.
Lane said the 5K will be a fun, family-friendly event that welcomes all members of the Hesston community.
“I would say the most important thing for people to know is this is an opportunity for them to come out and participate in the event, even if they don’t want to participate in the race. It’s centered around the race, and we have invited vendors. Whitestone Church will be selling chicken, vendors from Newton and a couple more hopefully, one with desserts and drinks.  It’s a fun opportunity for the community to come out and try some great food, see neighbors and connect with people from surrounding areas and cheer on the race,” said Lane.