We are so honored to share our race with Chief of ISRD Weapons and Tactics, Brent Miles. He will be running simultaneously with our runners while he’s deployed in Qatar with the United States Air Force. His “shadow” run will be in the desert where it reaches up to 130 degrees. We are so pleased to let you learn about this solider and his love of the sport. 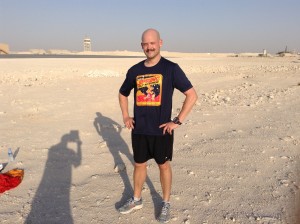 Training for PFM in Qatar

Can you tell us about the Shadow Program?

The shadow race idea was really born out of my last deployment to Al-Udeid AB.  I ran my first half marathon during that deployment and caught the half marathon distance bug.  I had a friend who was part of another group of runners who signed up for multiple shadow races.  While I didn’t participate, I didn’t forget the concept.  Between that deployment and this one (about a year and a half), I ran an additional seven halfs.  When I get orders to go back out to Al-Udeid, I knew that I didn’t want my running to fall off and that I wanted to challenge myself.  I figured running shadow races would be a great way to do it.  In May, I started looking up races both in my local area as well as races all across the country.  I emailed race directors and race email addresses with the goal of running 15 total half marathon shadow races during my deployment.  I emailed close to 35 races and heard back from most.  The partnership is definitely an individual one between the race and I.

May I ask why you chose PFM as a race to shadow?

Honestly, I don’t even remember where I found your race online.  I started with a standard google search and ended up reading through a number of running blogs.  The primary driving factor for me was races during my deployment window as well as races I hadn’t run before.  I tried to look for races across the country and ended up with sponsors spanning from coast to coast.

Can you tell us where you are deployed?

I am currently deployed to Al-Udeid AB which is located in Qatar.  This is my third deployment (Baghdad, Iraq / Qatar / Qatar).
Where is home?
I grew up in Hamburg NY (south of Buffalo).  Since joining the Air Force, I have lived in Montgomery AL, Phoenix AZ, Kunsan South Korea, Las Vegas NV, and I am currently stationed at Joint-Base Langley-Eustis in the Hampton Roads area in Virginia.

What is your running background?

I really started running my senior year in high school with a friend.  Our goal was to train for the Wineglass Marathon in NY.  We both didn’t end up running that race due to college.  I kept running off and on through my first few assignments in the military.  When 2012 came around, I decided that I really wanted to start running half marathons and I haven’t looked back since.  HIIT strength training, speed training (mile repeats), and long runs make up the bulk of my training program.  Your race will be the 12th half I will have run. 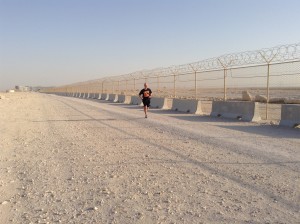 What conditions do you have to run in while deployed? Best? Worst?

The conditions here aren’t too bad.  During my first deployment, all of my runs were done inside.  We had a burn pit on base and the air quality was absolutely horrible outside.  In Qatar, the biggest problem I am experiencing now is heat and humidity.  The real-feel temperature when I first arrived was in the high 120′s or low 130′s during the day and most nights didn’t drop below 95 degrees.  Long runs outside are impossible so I ended up doing almost all of my running inside on a treadmill.  The temps have dipped a bit but lows are still in the high 80′s. Once October or November rolls around, conditions here will be awesome to run in. The occasional dust storm does kick up (we’ve had two this week).
Prairie Fire Marathon , Qatar
Tweet This Post
© 2021 See the Prairie Fire // theme by amplifiii // back up ↑