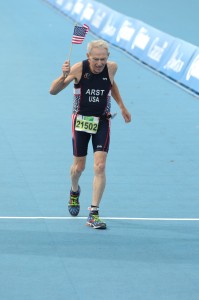 How did you get into running?

“I started running in the 70’s. I got into running because I played handball and I wasn’t very good. At that time, people around here were starting to run marathons I thought that it was really something, and wondered if I could do it.

In 1968, the then-director of the YMCA I belonged to talked to a club I belonged to… and had us all take our pulse. Mine was normal, but it got me thinking…my dad died of a heart attack at 47, and I had uncle die at 52, and I was a smoker at the time, so I joined the Y and started playing handball and running.”

How long have you been running competitively and how many races have you ran?

“My first marathon was in 1979, but I have no idea how many races I’ve been in. I used to run two marathons a year, and in those days they didn’t have 5K’s like they do now. They had 10K’s, and I ran a number of those each year.

Back then…people were really competitive. People now will say ‘I’m going to do a half-marathon or marathon,’ and that means walking a lot, or walking the whole thing, and that wasn’t true back then.” 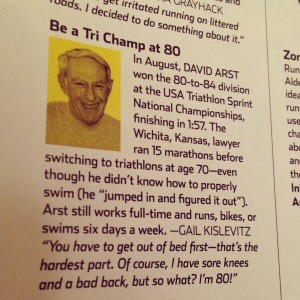 I saw you were part of Team USA at the 2014 International Triathlon Union Sprint Triathlon World Championships, and won gold in your age group. Would you consider that the most proud moment/accomplishment in your running career?

“I think so. I think qualifying and running my first Boston marathon was very huge. That’s every long-distance runner’s dream. I think the greatest race I ever had in my mind was when I qualified the first time. I did that in 1981 in Dallas [Texas] at the Dallas White Rock Marathon [now called the Dallas Marathon].”

Do you have any special rituals or routines that you attribute to your running career?

“Well I don’t think it’s anything special…unlike the majority of runners and triathletes, I really don’t cut down a lot in my training before a race. [In the two or three weeks leading up to a race,] runners will back off from running longer distances. I taper off a week before the race, because I would feel like I needed the work. For me, it wasn’t necessarily gaining anything, it was not losing anything. The older you get, the quicker you lose your fitness.”

What do you enjoy most about the sport?

“Finishing. I’ve never really liked it a lot, I know that sounds odd. The hardest thing is getting out the door, once you do that…things are okay.

I don’t know that I’ve ever had that…runner’s high. I don’t ever remember thinking ‘oh gosh I have those endorphins kick[ing] in.’ I’m still waiting!”

What do you like about the Prairie Fire Series as compared to other similar events?

“I love the Prairie Fire races because they were really the first kind of ‘big time’ atmosphere we’ve ever had here…there’s no question about it. [President] Bob [Hanson] has done a heck of a job making feel like a big time race. The best thing is the expos, the bands, [and] the schmaltz that goes with it.”

What advice would you give to anyone who is thinking of taking up running?

“Just to do it. Like I said, the hardest thing is getting out the door. It doesn’t matter how fast you go, as long as you get better and better. Be consistent, there’s always 5 million reasons not to do it…so just make it a priority.”

Any thoughts/plans on your running future?

“Right now, I’m in a dilemma whether or not I should go to the World Triathlon Championships in Chicago this year.

I’m going continue to run triathlons, and I’ll continue to do races for as long as I can. If I don’t do the World Triathlon, then I’ll probably try and do the half-marathon in the Prairie Fire.”